Today is India celebrates the New Year in the Sun Calendar.
The Indian Calendar has a parallel of Moon and Sun that run in sync to each other.
There are two New Year days that comprise the calendar(s) in the ancient Indian pagan calendar: one for the Moon year, and one for the Sun year.
In this newsletter we hope to shed some light (and shadow) on this almost forgotten tradition and offer an explanation as to what it signifies to Tantric yogis in their quest for healing and, for lack of better words, enlightenment.
We hope you will find the reading of interest and use to you in these challenging times…

It is based upon an ancient Tantric honouring of both of these forces which are radically different and, in some ways, we could say opposing each other and yet together.
Hence these two calendars run in synchronised union. These forces exist within us and are mirrored in nature. Or the other way around, if you will.

Recently we have started giving information of this Tantra line of Yog through our newsletters. These being small excerpts from a greater work we plan to publish in time.

A lot of what is imparted here
has not been written about before
& comes from the oral tradition
of Tantra in India.

It is important to know that the British rule left a big imprint and laboured under a long standing Vatican objective to eradicate Shamanic cultures the world-over – a mission that was first institutionalised around the year 1300 through the signing of a document titled the ‘Institution of the Crown’.
It is no surprise therefore that the New Year days, of Moon and Sun, have fallen out of favour and are not so commonly honoured or remembered even, amongst modern Indians.  Mainly the pagan folk and the Tantrics celebrate today. There are religious services and festivities in different regions that do celebrate this festival, some with an agricultural slant. It is much in the same way we might celebrate Easter. For example, some regions make a special sweet from mangoes on this day. The deeper meaning behind this offering and indulgence is that the mango symbolises the sun by its colour – It could be seen as the Eastern version of the Easter egg.

Only in relatively recent times has permission come to me to present such Tantric Hatha Yog principles. Yet translating  this wisdom into concepts that can be understood in Western terms has proven a phenomenal challenge. I feel my writing is most inadequate but the process if being ever perfected also through the close exchange with Kim who has been accompanying me on this journey and motivating me over these past six years of collaboration.

India and the West are radically different cultures.

It is important to know that the British rule left a big imprint and laboured under a long standing Vatican objective to eradicate Shamanic cultures the world-over – a mission that was first institutionalised around the year 1300 through the signing of a document titled the ‘Institution of the Crown’.
It is no surprise therefore that the New Year days, of Moon and Sun, have fallen out of favour and are not so commonly honoured or remembered even, amongst modern Indians.  Mainly the pagan folk and the Tantrics celebrate today. There are religious services and festivities in different regions that do celebrate this festival, some with an agricultural slant. It is much in the same way we might celebrate Easter. For example, some regions make a special sweet from mangoes on this day. The deeper meaning behind this offering and indulgence is that the mango symbolises the sun by its colour – it could be seen as the Eastern version of the Easter egg.

The occult understanding of India has known of the power of this day and that’s the reason behind pundits, astrologers and magicians prescribing this day to effect new ventures.
Note that the Sikh religion and military in the North India on this day centuries ago was erected and is orthodoxly celebrated.
For the Tantrics the meaning and ritualistic inflection of this day is rather more than a festival. It presents a magical doorway of possibility within the realm of healing one’s life. It is seen that a doorway that opens planetarily and aligns to a specific focus and spiritual / physical practice for working with and balancing the fire element.

Modernity, as a political project of the West, has traditionally replaced the wisdom of Nature with secular, social and economic interest.

Even within the modern development of Yoga
there has been a whitewashing
of an ancient & detailed practice
that leaves out so much important information
– much of it not being available at a price
(ie: teacher training programmes),
but only through initiation.

Is it such a bad thing to absorb an ancient culture and put it out within our own terms, or should we go towards the original spirit and why?
Questions such as these are raised when we consider disappearing wisdom.
What are our own cultural terms? is a question that will bare much fruit both collectively and personally if we dare ask.

It is relatively easy for anyone to present the subject of yoga after a few weeks of training, and many well-meaning enthusiasts do precisely this – but equally many important stones may stay unturned in the reduction of a profound subject into the uniform we ascribe to it.
There are important things to consider in completing the wheel of yoga: points such as the effect of the moon and the corresponding moon practices, or the gender of the practitioner, which is of the utmost importance when moving and working with psychophysical energies.

Not surprisingly, in the predominantly patriarchal civilisation in which we live, many of the common modalities of Yoga are practices that do not suit the feminine constitution and can work counter-productively for the woman’s body and health.
Just like the disappearing remembrance and knowledge of the Indian New Year days, the disappearance of the wisdom of mantra and ritual is being forgotten in the modern Yoga band wagon that modernity packs itself full with in its attempt to transplanting ancient modalities and wisdom into the reductionist structure of modernity.

The thing with psycho physical practices is that they can disorder the physical and spiritual system if not undergone with correct knowledge. A well-meaning or positive approach is no safeguard to destructive effects.
I’ve seen numerous times imbalances derived from modern yoga, among practitioners coming to this work and seeking help.

Disorder such as imbalance of menstrual cycles
and gynaecological problems,
because of sustained incorrect practices
such as Astanga yoga are not uncomon
and much work – from this Tantric line –
was required to rebalance the system.

For example, if a woman takes to practicing with regularity the masculine mantras and bija mantras that do not suit her constitution, she will invite problems of the reproductive and sexual areas of her body.
This can in turn follow the meridian to the knee and can present problems there too, and from there progress further into the body and penetrate the sphere of the emotions and the psyche. The emotions and the psyche are touched very deeply through psychophysical practices, it goes beyond the layers of the body.
The network of physical and psychic circuitry being intimately connected.

The Solar practices (such as most modern styles of Yoga popular in the West) are not suited to all constitutions and can create heat which in turn creates hardness and increase heart rate – something we touched upon in the previous newsletter about Hanuman and Pranayama. This is especially increased if they are carried out at the unfitting time of  the season.
The lunar practices are for woman and invite fertility in many areas.
These practices are radically different from the male practices.

Some of the modern practices
incorporate moves
that can block the Heart meridians
& this works counterproductively
when working with the Breath & Heart,
both on the physical & psychic levels.

These are often practices that are implantations that do not come from Yoga but were developed along gymnastic type lines of training and got mixed in – Mark Singleton’s historical documentation of the influence of Western circus gymnastics on India’s modern yoga (‘Yoga Body’, 2010)is a must-read for anyone interested in the subject of the origins of modern yoga.

Tantra follows nature and prescribes Solar practice for both woman and man around this time of season.
The fire is brought into balance in the system by this, that is: the fire that has been slumbering in the dark months and perhaps entered into Tamasic (withdrawn) mode.
Generally working the inner channels of Nabi Chakra (belly button) and focussing on the colour gold is an injunction for stoking the fire element in the body. A (Tantric) mantra chanted repeatedly in support of this objective is the following:

Moon and Sun must go together so first a mention of the recent New lunar year. At the time of the Moon New Year (first New Moon after the Equinox – see Spring Full Moon Newsletter) the Moon energy is activated and favours the addressing of the soft rising feminine energies of the Moon through the Chakras.
At the middle of April each year, when the moon is half lit and half dark, the solar calendar commences. On this day the solar plexus Chakra is in balance. The rising warm season is upon us and the solar plexus is brought into activity now after a long Winter slumber – the solar plexus not being so active in the colder months.

Physical appetite in the solar plexus is strong in this time and it is a time to eat well but not to overtax the fire. Projects and activities started on this day are imbued with solar energy and can be brought to success by this planetary assistance. That is to say, the Tantrics believe that to set an intention on this day – if propagated with the effort of keeping the fire alive – will yield great results.

The solar plexus Chakra is fully active when it’s in balance with the third eye.
The colour of the solar plexus is yellow, or gold, and the opposite colour in the spectrum is indigo, which corresponds to the colour of the ‘Third Eye’ Chakra.
The third eye is connected to the dark side of the Moon, and is at its maximum on the New Moon – that is when the Moon is entirely dark.
The third eye becomes a vacuum that draws up the energy at the new Moon.
The half illumined and half enlighted Moon on this day represents the balance of the Chakras that deal with fire.
The Fire at the Solar Plexus is called Agni and is a hot consuming flame. The Fire at the Third eye is Called Teja and is cool and known as Moon fire.
When this condition is unbalanced, or reversed, the sun moves to the third eye and the solar plexus becomes weakened as the dark moon takes residence there.
This translates into a busy mind and no strength – a condition we might be familiar with.
The old and highly esoteric yogic injunction to ‘raise the Moon in the day and the Sun in the night’ would be worth pondering over. Tantra says:

Set your spiritual vision of fire
& work for it from this day henceforth
to the result.
Be wise in the use of energy
for what the Heart truly needs.
To put the power for healing
is the code of the Tantrics. 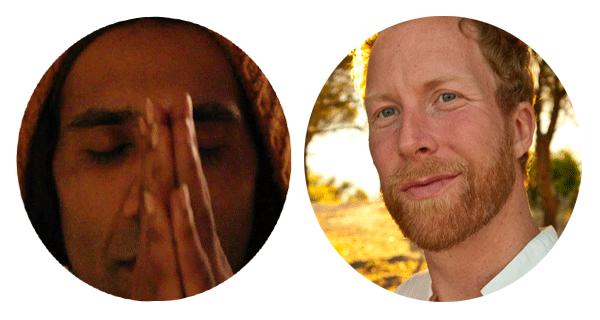